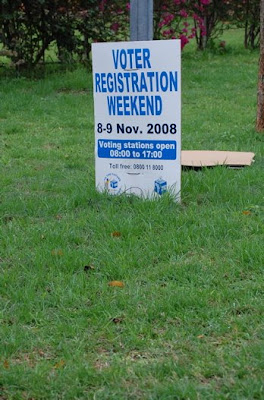 As our fellow American friends flocked to the voting booths on Tuesday, South Africa prepared to register its voters this coming weekend. Please pray for the upcoming elections here as I’m sure you have prayed for the elections in the states.

I don’t claim to know a lot about politics but I can give you what I do know. South Africa’s most recent President, Thabo Mbeki, was basically forced to resign under allegations that he conspired to undermine Jacob Zuma, who defeated him for the ANC presidency last year. Mbeki was not a very popular President anyway after expressing his views on HIV/AIDS, his perceived lack of concern for the country’s rising crime rate, and more.

From what I’ve gathered here, you actually vote for parties instead of people for the presidency. The ANC (African National Congress) has pretty much been the leading party since the fall of apartheid in 1994. There has been another party developing who wants to rise up, but it’s almost a sure deal that Jacob Zuma will be the next President of South Africa.

“Zuma was fired as deputy president by Mbeki in 2005 after he was implicated in corruption in a controversial multibillion-pound arms deal for which his financial adviser was jailed for 15 years. Since then, the two men have been engaged in a battle for the ANC’s soul.”

There is a lot more to say on this but this gives you a taste of the Presidential elections coming up soon. Many fear that, with Zuma as President, the economy will suffer and corruption will increase. His views on HIV/AIDS are also ridiculous. He caused widespread outrage when he announced the showering after intercourse reduces the risk of HIV infection.

Posters have been posted all over White River encouraging voters to come register this weekend. In January there will be another push to register. Elections are supposed to be held in April but with Mbeki getting ousted, there is talk that elections will be sooner. Thanks for your prayers…

fire in the lowveld

a weekend with a friendly giraffe