Does The Tooth Fairy Visit Airplanes?

Let me replay the scene for you…

Jen, snoozing as best she can in an upright position on a REALLY long flight.

Annoyed that she was awoken from her slumber, Jen turns around.

In an instant, annoyance was replaced with excitement as she saw her firstborn, smiling with a gap in between his bottom teeth. Hand outstretched, there it was. A small, white tooth resting in the middle of his palm. Picture time!

Joshua: “I pushed my tooth with my tongue and then I was like….where is it?!”

Luckily, he found it floating around his mouth! 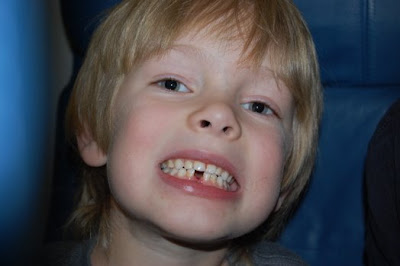 This little event prompted me to find out the origin of the tooth fairy. As kids, we always hid our baby teeth under our pillow for a few bucks, but why? After doing some research, I found out that it is indeed practiced in S. Africa as well. “Some academics hold that the Tooth Fairy evolved from the tooth mouse depicted in an 18th century French language fairy tale. In “La Bonne Petite Souris,” a mouse changes into a fairy to help a good queen defeat an evil king by hiding under his pillow to torture him and knocking out all his teeth.”

Many nations have different traditions when it comes to losing baby teeth. In the U.S. the tooth fairy started showing up around 1900. One of the earliest depictions was in The Little Rascals short entitled “The Awful Tooth” where the boys started pulling their teeth to make money. To read more about the tooth fairy, visit here.