so i heard there were riots outside my driveway 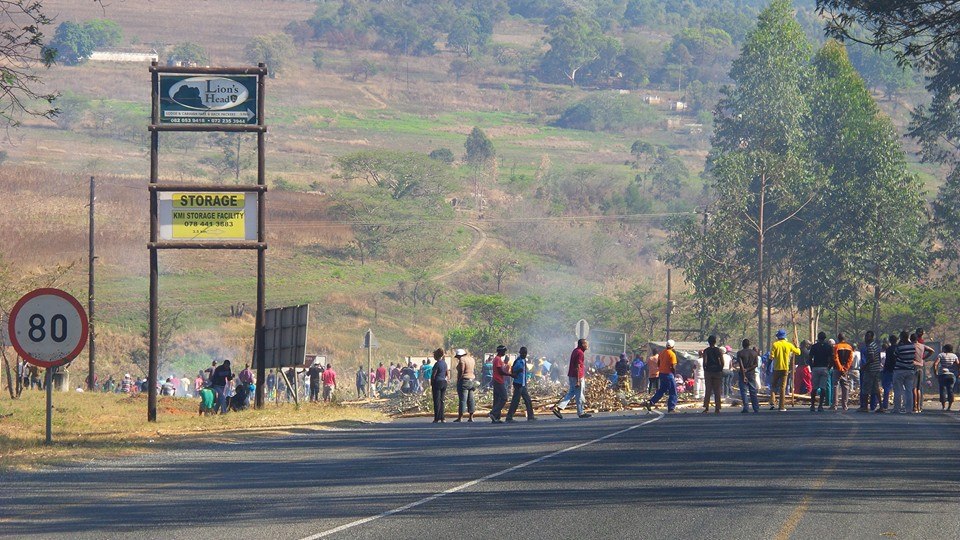 the scene on our road yesterday ~ image source

Yesterday morning I woke up to the sound of an airplane circling over my house. I didn’t think anything of it until 30 minutes, an hour later when it was still circling. That’s when I found out why. There were riots and protests in the nearby communities (and on the road we live on) over water. I have to admit my eyes rolled a bit, and I refrained from posting on social media, because there was something not right in my soul.

I first stepped foot on S. African soil 14 years ago. Over the course of those years, I’ve seen loads of strikes, protests, riots. Taxi drivers and bus drivers refusing to operate local transport, because they wanted more money. Who suffered? The working man because they couldn’t get to work. Government workers refusing to go to work because, again, they wanted more money. Who suffered? The children who couldn’t go to school and the people in public hospitals because there was no one to care for them. City workers once dumped trash all over the streets of our town, because they wanted more than what they were getting. The ironic thing is that once they got what they wanted, they had to pick up their mess.

To be bold, you know what this reminds me of? It reminds me of a child who throws a tantrum, because they aren’t getting what they want and the parent, out of desperation, gives in, because they don’t know what else to do. My dear S. Africa, you are not children. You are beautiful men and women who God wants to use to change this nation.

If you look at the history of S. Africa, riots, protests, and strikes have been the way people have gotten what they want. However, this is an old way of doing things. This is not the answer. God has something new for this rainbow nation, and I believe it involves uniting everyone together so that in one accord, you can hear the ringing of, “I am proudly S. African.”

I am praying for this nation, but my prayers aren’t just praying for the violence to stop. My prayers are from a deeper place of longing to see change. My prayers are for a unity of people. They’re for love, hope, and peace to be the driving force rather than hate and war. They’re for openness of people’s hearts to new ways of doing things. Call me an idealist, but I believe in the power of prayer and than Jesus can change nations. Will you pray and believe with me?

“No one is born hating another person because of the colour of his skin, or his background, or his religion. People must learn to hate, and if they can learn to hate, they can be taught to love, for love comes more naturally to the human heart than its opposite.”

“If there are dreams about a beautiful South Africa, there are also roads that lead to their goal. Two of these roads could be named Goodness and Forgiveness.”

Let’s listen to the man who rose into power after he walked through forgiveness and made strides toward reconciliation. Let’s walk in love, because that’s where the power is. There’s a beautiful S. Africa around the bend, but the roads to get there aren’t paved with hate.

to change a nation, love the children