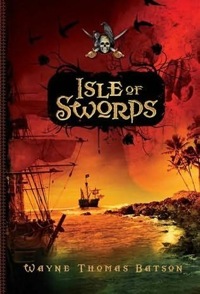 I love being able to read books before Joshua, 1. So I can parent check it before I put it into his hands, and 2. It gives us something to discuss after he’s finished the book. I haven’t read a Wayne Thomas Batson that wasn’t suitable for my almost 13-year-old son, so in this case, I was going for number two.

I didn’t know if I would like Isle of Swords, because I’ve never really read any pirate books. I also wondered how in the world he would tie in some spiritual truths into a pirate book, but alas, mateys, he did! This tale will take you on an adventure with Declan Ross, captain, and his daughter, Anne. Captain Ross wants out of the pirate business, but that’s not an easy task. He’s in search of a treasure, but the map is physically attached to a Mr. Padre Dominguez. AND of course, he encounters the mean pirate, Bartholomew Thorne, along the way along with British troops who aren’t too fond of pirates on the high seas. It’s a story that will keep you on your toes and leave you talking only in pirate lingo. (Your kids will love that.)

There’s also lessons in identity and choosing to do what’s right in the middle of difficult circumstances. I really enjoyed this book, and I think the adventure loving pre-teen boy in your life will, too!

I have one copy of Isle of Swords up for giveaway courtesy of Tommy Nelson. Giveaway is open to U.S. addresses only. Enter through Rafflecopter below!

Disclosure: I received a free copy of Isle of Swords from Tommy Nelson in exchange for my honest review. All opinions are my own.