meet posey…what it’s like living with a jack russell 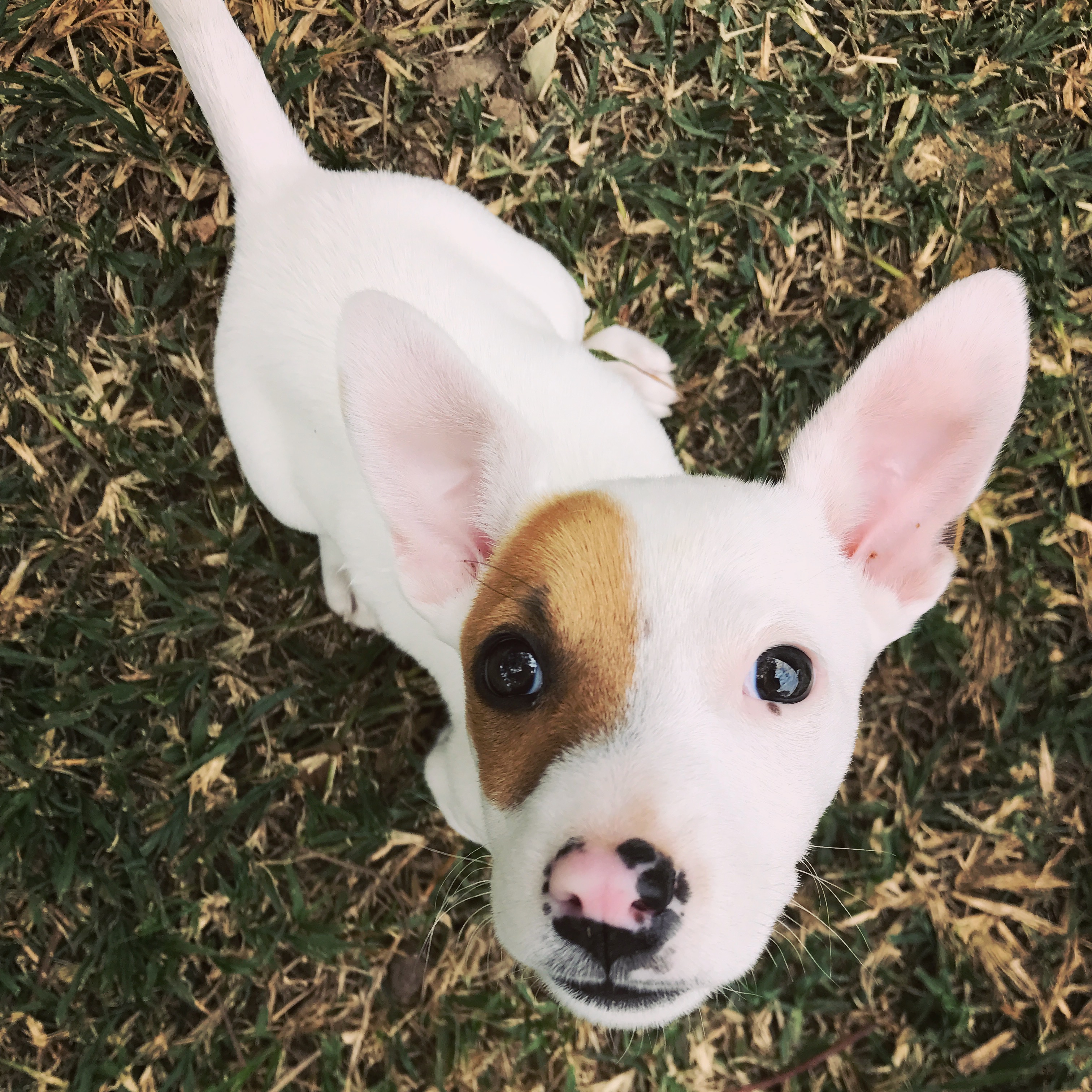 The sudden loss of Snowy brought a lot of emotions into the household. We all grieved her terribly. The house was so incredibly silent. We knew we could never replace her, but the kids really wanted another dog. We thought it would be a good way to bring healing, so we visited Pro Life Pet Rescue and Rehabilitation. We were thoroughly impressed with them and the way they cared for the animals. We were excited to rescue a dog and give it a loving home.

We went to visit, and surprisingly, both kids fell in love with the same dog. They don’t agree on much these days, so we thought we should jump on it. There was just one small hitch. This particular puppy was a Jack Russell, and I was apprehensive that we were a Jack Russell family. I never owned a Jack Russell, but several years ago, when my brother-in-law and his family lived with us for about 6 weeks, they got one. That dog drove me crazy. I had actually forgotten about that dog until I read the list of traits attributed to this particular breed…intelligent, vocal, high energy, fearless, stubborn. I felt like this was about as opposite as we could have gotten from Snowy which is why I kept asking the kids, “Are you sure we’re a Jack Russell family?” They assured me we were. 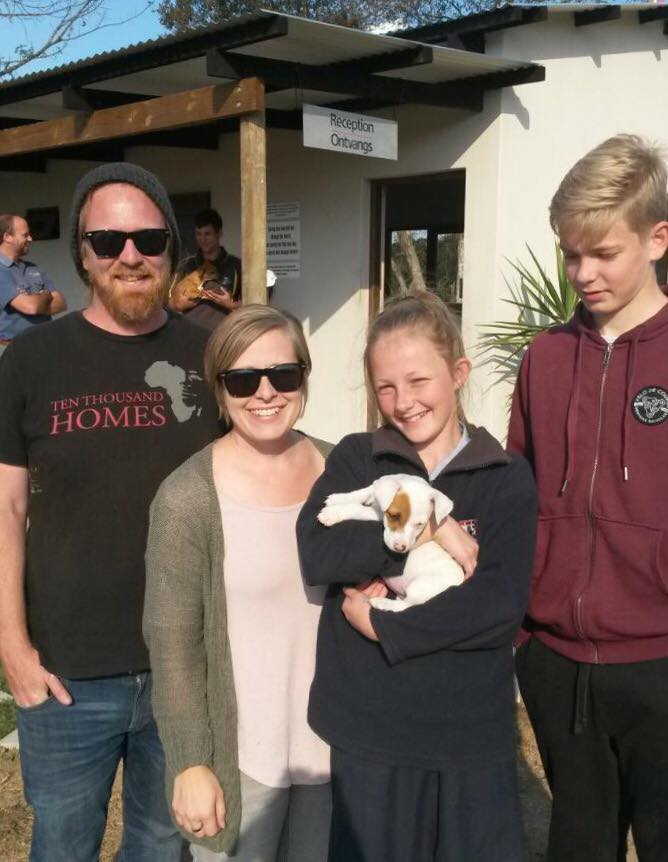 And so we went back a few days later and adopted Posey. When the gal told us we could get her out of the pen and bring her to the office, I turned around to see her waiting at the gate looking at us. It was the sweetest thing ever. I guess she was ready for a home, for our home.

First, they trick you with their cute looks. I mean look at that face. Isn’t she the cutest? 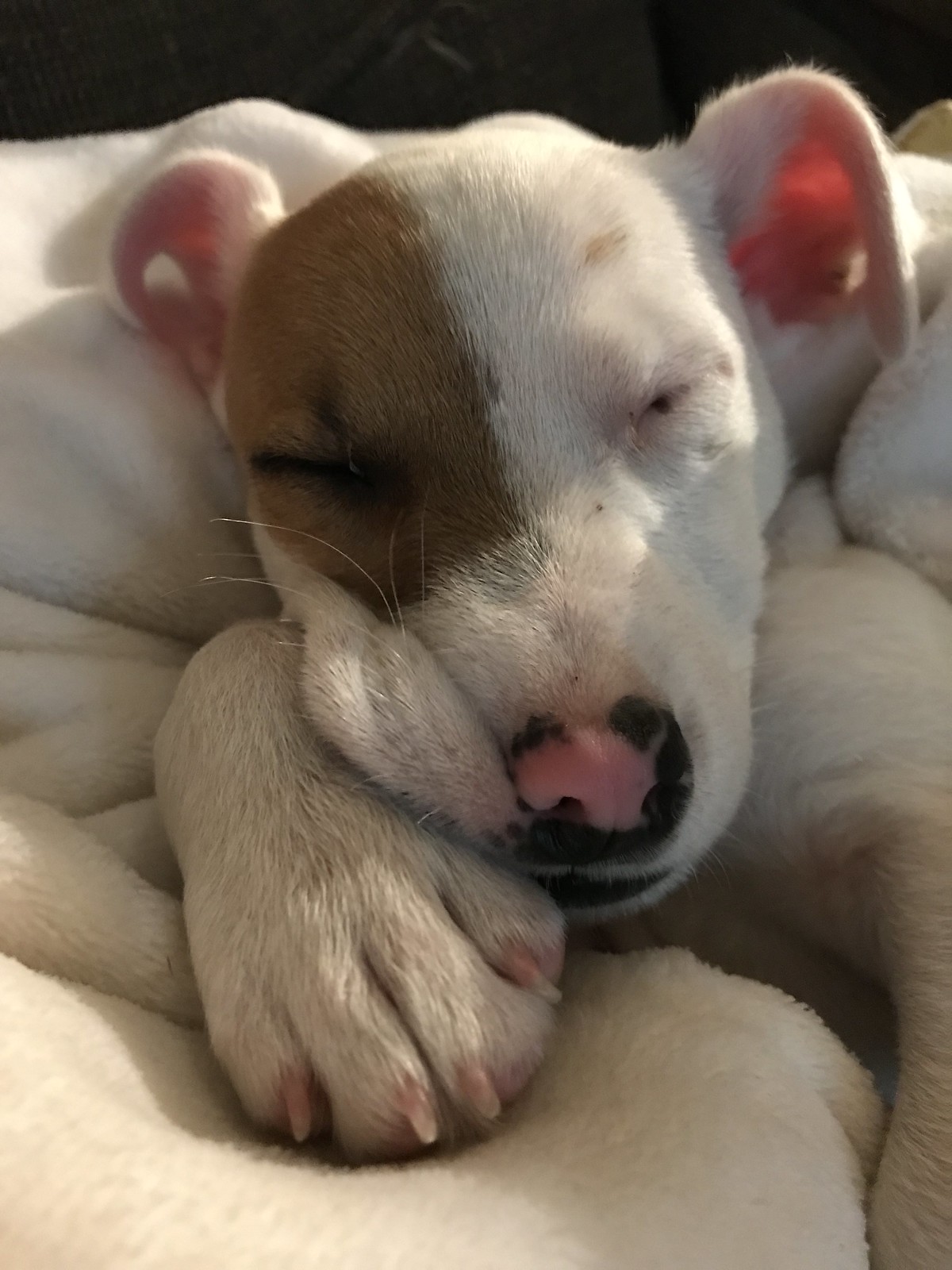 Once they appeal to your emotions, the fun begins. They desire to be the top dog, the dominant one in the family, and their stubborn, fearless nature means they will do anything to secure their place there. To come against this, I used her food. She loves her food. She acts like she hasn’t eaten in weeks when we feed her. I’ve trained her that she was to sit and stay while her food is being poured. After I put it down, I say EAT, and she knows that’s her cue to eat. I was amazed at how quickly she learned to do this.

Because she loves to eat, she doesn’t seem to know the difference between what she should eat and what she can eat. She didn’t get the memo that chocolate and caffeine = bad for dogs. She found a Hershey’s kiss in EG’s room (keep your door closed, honey!) and sniffs out fallen coffee beans under the coffee bar. Seriously, this tough, hearty dog is giving her system a workout!

Everything is a toy to Jack Russells. My backyard looks like a land mine from all the digging. Seriously, is this dog trying to get to China? And all the toilet paper. Oh, my. If it’s slightly hanging over the edge, she grabs it and runs with it. Twice in one day she unrolled 2 whole rolls of toilet paper. It’s amazing how fast that can actually be done. She loves car rides, but I don’t necessarily take her because she loves them. I take her because I don’t trust her alone inside or outside my house! 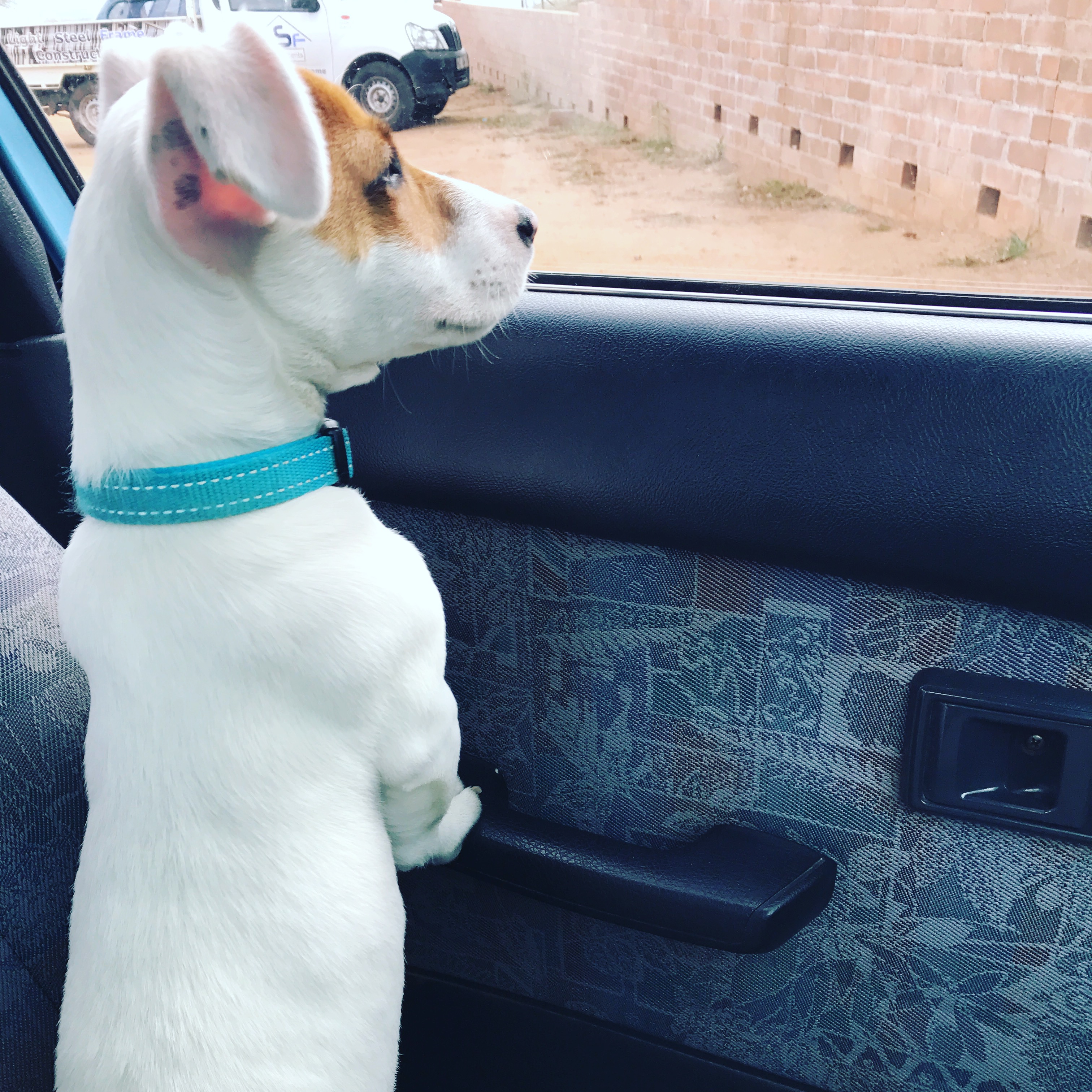 They get bored pretty easily (hence the toilet paper saga), so I basically give her trash to keep her entertained. Empty peanut butter container? Here, puppy. Empty plastic pot after replanting a plant? Here, puppy. She runs off with these items like she’s just scored gold. And she has. For about 5 minutes, and then she’s so over it.

Their minds are like sponges. They are incredibly smart and love learning new things, so teaching tricks are fun…except when she’s feeling particularly stubborn. We’re currently working on high five.

At the end of the day, after all that digging, toilet paper unraveling, mischief making, and trick learning come the cute cuddles. It’s amazing how energetic and passionate this dog can be one minute and how sweet the next. She loves being affectionate and cuddling in your lap. It’s a good thing, too. It helps erase all havoc she wreaked throughout the day. Sort of. 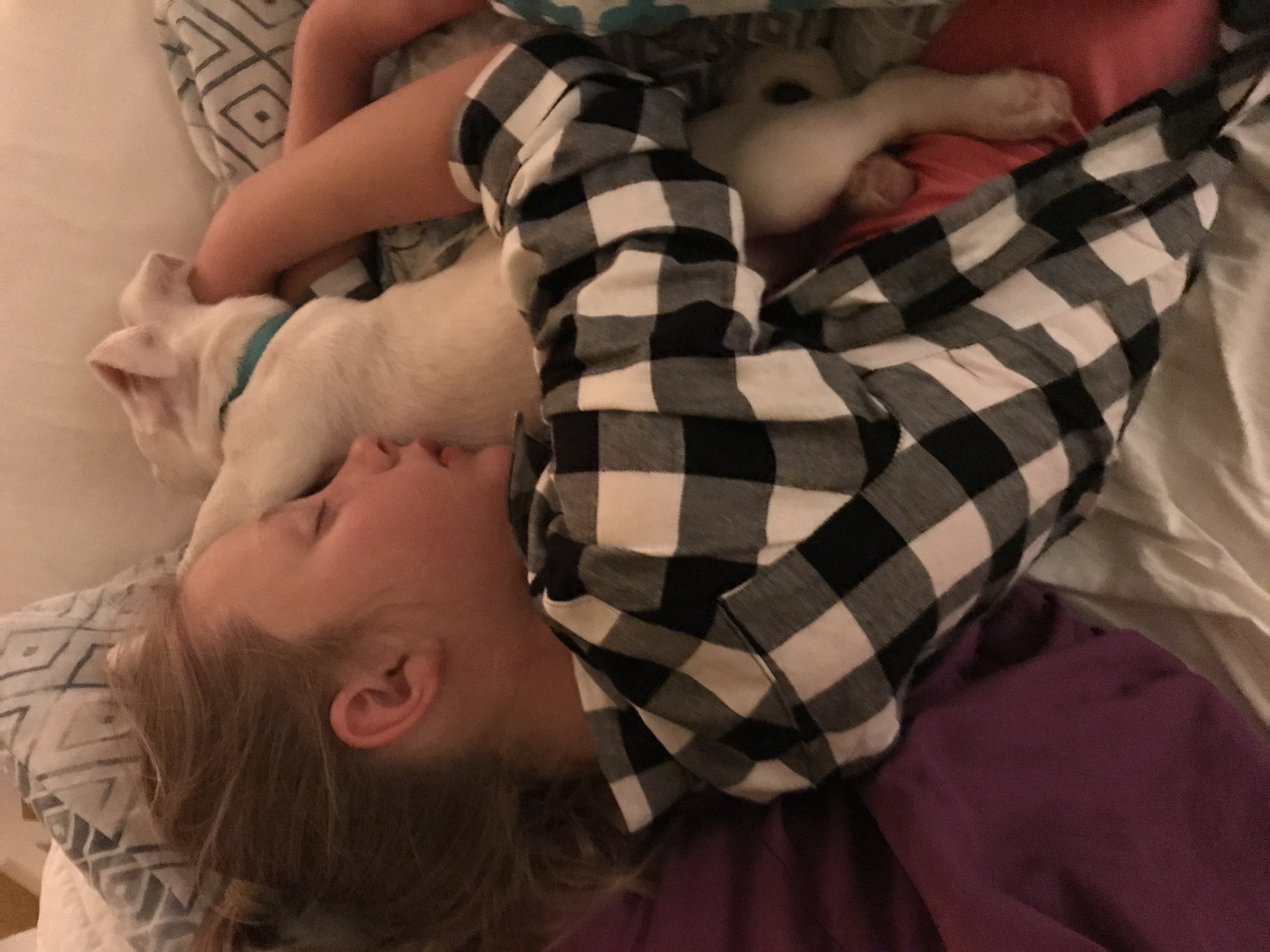 I read somewhere that Jack Russells, even though they are small, think they are big dogs. They will even attack a doberman for looking at them the wrong way. The vet told me that if a Jack Russell doesn’t die of old age, it dies from chasing a car and getting hit or from a snake bite. They are fearless! I think Shakespeare was thinking of this breed when we wrote the line, “Though she be but little, she is fierce!” There’s something annoying about it but also something I love about all the drama wrapped up in this little package.

Here’s to owning a Jack Russell and not losing my sanity.

a girlie day for my girlie

Role Models :: When I Grow Up…