An Afternoon Of Mancala 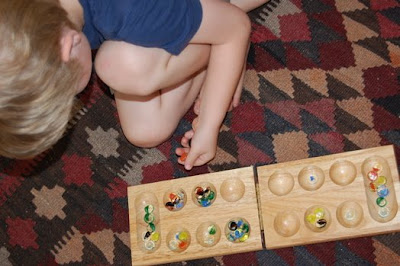 Joshua, my child who loves games, pulled out Mancala one fine Sunday afternoon. It was given to us as a gift some time back but we didn’t really know how to play it. Joshua was all set to make up his own rules to the game, but I suggested we read the rules and learn the “right” way to play. It’s actually quite simple. Mancala means “to move” and that’s literally what you do ~ you move the pieces around the board. I’ve watched the kids in the communities play this African derived game simply by digging out holes from the earth and using rocks instead of the now western version…gemstones. 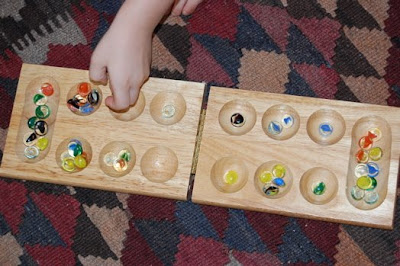 I found it interesting that the first evidence of the game was found in Ethiopia dated back to between the 6th and 7th centuries.

This is another game that is great for kids Joshua’s age (6 years). It’s simple enough to understand yet perfect for developing strategy skills. After I taught Joshua to play, he went on to teach his sister and daddy. He actually won fair and square playing Jeremy! That’s my boy!

If you want to read more about the origins of Mancala as well as the rules of the game, visit wikipedia.

Off To The Rose Gardens