It Happened In Italy By Elizabeth Bettina 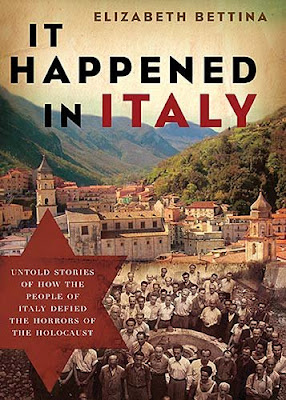 I’ve always been fascinated by the Holocaust. My mind just can’t seem to understand how one person could have so much influence, control, and evil in their hearts to kill innocent people. I just don’t get it. So when I picked up It Happened In Italy and began reading a different side than what I learned in school, my heart was overjoyed to know that there were those that valued the Jews as people.

This book offers a hope that most of us didn’t know existed during this horrific time in our history. To read the stories of Jews who came out of these camps in Italy with fond memories of the soldiers working them, you know that they were treated well and as human beings. A direct contrast to the stories you hear from camps like Auschwitz.

Although I really, really loved being able to read a positive side to an event that killed millions of people, the writers style didn’t really grab me. I found it a bunch of facts that didn’t peak my interest. I wanted to love the book but I have to say that I found it just ok.

The Boy Who Changed The World by Andy Andrews

Reading…Making Children Mind Without Losing Yours