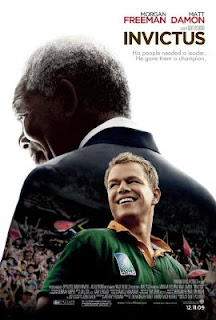 Last night the hubby and I went to see Invictus, a movie starring Morgan Freeman and Matt Damon set in S. Africa in the 90’s when S. Africa won the Rubgy World Cup.  The movie is fantastic, if you haven’t already seen it.

Let me set the tone for you.  Nelson Mandela was released from prison on February 11, 1990 and then elected president in 1994, right when apartheid started to fall.  I can’t imagine the weight of responsibility to take office at such a time, but I believe he was the right man for the job.

As I watched Invictus, I was challenged seeing what Mandela did with his one life.  He was not a perfect man, but he was a man who did much with his one life.  After being imprisoned for 30 years, he forgave the ones who imprisoned him.  I don’t believe he could have changed S. Africa like he did had he not walked through that forgiveness.  It’s powerful and life giving.

As he took the presidency, the blacks wanted to eliminate the Springboks rugby team because it represented oppression and captivity to them.  Instead Mandela sought to get the entire country to rally behind them, bringing together a new S. Africa, the rainbow nation.  If you haven’t seen the movie, I highly recommend it.  It will definitely impact you and challenge you with what you are going to do with your one life.

i’m not a conference person