I’m not a big fan of Halloween.  I just don’t get the point of dressing scary and making it all about ghosts and witches and spiders.  We’ve never done trick or treating with the kids, one, because they were too young when we lived in the states, and two, they don’t do Halloween in S. Africa.  This year, however, the kids saw all the hype.  The stores, their friends, everyone was talking about it.  We decided to let the kids dress up this year (it just couldn’t be scary), and we would participate in our town’s event, their school carnival, and our friend’s fundraiser.  Those 3 events alone brought in enough candy to last us a lifetime!  (See my post, Post Halloween Sugar Rushes, to see what to do with all that candy!) 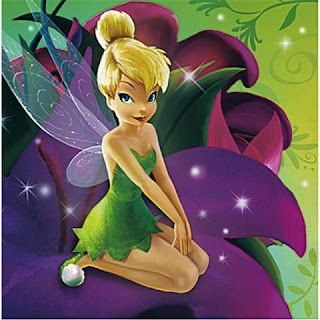 Emma G decided rather quickly that she wanted to be a fairy.  The first thing I thought of was Tinkerbell!  I found the above photo and attempted my own version of a fairy costume.  I already had a lot of supplies and wound up only spending about $10, and I had a fun creative outlet in the process! It involved lots of felt, tulle, ribbon, and hot glue!  Little Miss and I both had ideas of what would look good.  After lots of dreaming up ideas, I think we were both more than pleased with the end result. I cut felt and sewed it in the back for her fairy shoes.  Then I hot glued it to a pair of flip flops.  A yarn pom pom was the perfect topper! I cut a leaf out of the felt and sewed some lines so it actually looked like a leaf.  I used a piece of gold ribbon for the stem and then hot glued it to a hair clip. We had a baby jar full of glitter with holes poked in the lid.  I got the bright idea to spray paint the lid and use it for fairy dust!  Then, I was informed that fairy dust went in a pouch.  So I sewed a little pouch, twisted 2 strips of yarn for the strap, and made a bobble to go on the front. Jeremy bent the wings for me using 2 coat hangers and then I put 3 layers of white tulle around them and hot glued gold ribbon around the edge and middle. I also glued some thin gold elastic to it, so she could slip them over her arms. I can’t really tell you how I did the skirt and top, because I just kind of winged it.  I consider myself a beginner seamstress so I would be embarrassed to reveal all of my steps!  All I can say is I used this site as my guide to knowing how much elastic to use. Joshua opted not to dress up after all, but he still got some homemade goodness to catch all the sweets he got!  About a week before all our festivities I saw the Candy Corn Trick or Treat Bags on Purl Bee and loved them!  They were much better than the plastic pumpkins I kept seeing in the stores.  The kids didn’t really know what candy corn was, but after we explained it, they thought it was hilarious to have a giant candy corn!  Joshua kept saying, “Will you put some candy in my corn?” Instead of trick or treating we opted for a family night out.  Mexican food, dollar movie, and frozen yogurt, yummy!

A Little Bit Of Sewing