Posted on March 9, 2011
assignment : take a photo of a house, building, or landscape using a small aperture of f16 or more and compose so there is a foreground and background Generally landscape photography will use a small aperture (remember the higher the number the smaller the aperture, because it’s a fraction) to get as much of the scene in focus.  However, there is still a trick as to where to focus the lens depending on how you want the shot to look.  Focusing on the foreground will create a somewhat blurred background.  Focusing on the background will create a somewhat blurred foreground.  In order to have everything in focus, your best bet is to focus somewhere in the middle.
The above photo is a shot I took in our local downtown.  While I was happy with how the colors turned out, I didn’t like the sky being so washed out in the upper left hand corner.  It was a cloudy day and I had few options to fix that.  In class I learned that a neutral density filter or a graduated neutral density filter would help with that because they take out an f stop or two. 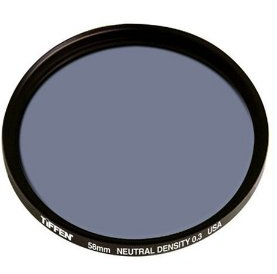 I also learned that a polarizer can produce deeper skies.  It’s also helpful in taking out glare.  Of course, you can also use Photoshop to do a little creative manipulation! 🙂

i heart her face {photo challenge}